Temitope Balogun Joshua, a prominent Nigerian preacher and televangelist widely referred to as Prophet TB Joshua by his followers, has died, according to family sources.

Gentechnews gathered that Prophet Joshua, the founder of The Synagogue, Church Of All Nations (SCOAN), died on Saturday shortly after conducting a live broadcast.

The cause of death was not immediately given to the public, but family sources stated his remains had been deposited at the mortuary and that an autopsy would be carried out as soon as possible.

Prophet Joshua ruled as a fiery television preacher for decades, attracting a vast number of Christians from all around the world to his platform.

In 2014, his church was the subject of a multi-national investigation after a piece of his Lagos headquarters collapsed, killing scores of people and injuring many more.

Prophet Joshua vehemently denied any wrongdoing, and a trial over the incident was still ongoing at the time of his death.

A post on his Facebook page, which has more than five million followers, said: “God has taken His servant”.

He was said to have died on Saturday shortly after conducting a live broadcast.

Tens of thousands attend his services, with top politicians from across Africa among his followers, but his teachings and practises were also seen as controversial.

In April, YouTube suspended his account due to allegations of hate speech after a rights body filed a complaint over videos showing the preacher conducting prayers to “cure” gay people.

Facebook also removed at least one post showing a woman being slapped while Joshua said he was casting out a “demonic spirit”.

However, tributes have been pouring in on social media for the preacher, widely referred to as Prophet TB Joshua by his followers. 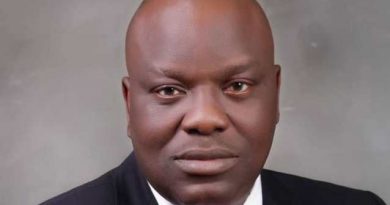 NCC commiserates with Board Chairman, Akande over daughter’s passage

Buhari Swears in Sambo as New Minister of State, Works/Housing