With few weeks to the commencement of the National Sports Festival, a section of the Stephen Keshi International Stadium, Asaba, Delta State capital under construction has collapsed.

The structure under construction ahead of the National Sports Festival scheduled to hold at the stadium this month was recently inspected by the Minister of Sports and Youths Development, Sunday Dare.

Although, the cause of the collapse is yet to be established but Gentechnews gathered that it would not be unrelated to the rush of the construction to meet the deadline for delivery of the project for use.

Recall, the festival was scheduled by both the local organizing Committee (LOC) and the sports ministry agreed that arrival for Asaba 2022 sports festival is November 2nd and 3rd, opening ceremony Nov 4, closing ceremony Nov 13, departure Nov 14, while the Games village will be closed on Nov 15, 2022.

However, the Chairman of Delta State Sport’s Commission and co-chairman of Asaba 2022 National Sports Festival, Chief Tonobok Okowa revealed that the state had embarked on construction of new infrastructure, including the Games Village ahead the sports festival.

As a result of the construction of new infrastructure, the National Sports Festival tagged Asaba 2022 was rescheduled to hold between November 28 through December 10, 2022 in Asaba, Delta State.

Sports Minister, Sunday Dare, has said that some international teams have been invited to participate in this year’s National Sports Festival, tagged Asaba 2022.

Speaking on a Radio Nigeria network programme, Have Your Say, in Abuja, the Minister said invitations have been extended to Ghana, Cameroon, Coted’Ivoire, Guinea, Benin Republic and Sierra Leone to present teams that will be part of the games.

“The National Sports Festival, Asaba 2022 is our own Olympics. We want to make it an African show, so we are adding some international flavour to it with the participation of teams from at least four West African countries. We are hoping to have about 16,000 to 18,000 athletes at the Sports Festival,” Dare stated.

In a swift reaction, the Commissioner for Information, Delta State, Mr Charles Ehiedu debunked media reports on the alleged collapsed stadium, saying that it was a crane incident.

Ehiedu explained that the incident that occurred was as result of a crane that was conveying iron material at the construction site that driver of the crane unfortunately did not align it properly and the material fell and damaged the a section of wall of the in-door building under construction.

According to the commissioner, only one worker at the site sustained an injury, adding that he has been treated and returned back to site. 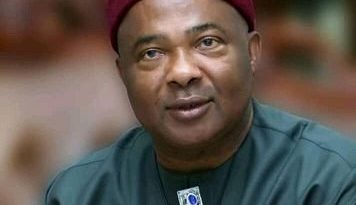