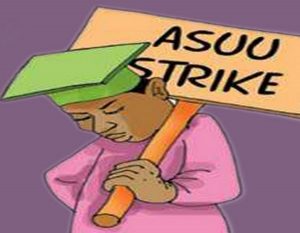 The Federal Government through the Account-general of the federation, Sylvia Okolieaboh, has appealed to the Academic Staff Union of Universities (ASUU) to accept the Integrated Payroll and Personnel information system (IPPIS) as payment platform.

Okolieaboh disclosed that the Federal Government would accommodate the peculiarities of the union on the payment platform.

Okolieaboh made this appeal at a meeting called by the leadership of the House of Representatives to resolve the ongoing strike by the union which has now lasted over 7 months.

Okolieaboh stated that his office was ready to accommodate issues of concern to ASUU over salary payment if that would bring the crisis to an end.

He explained that adopting UTAS, which ASUU demands, might prompt unwholesome demands from other agencies to be paid with platforms of their own choice.

“One of the risks in adopting UTAS is that everybody will come and say give us our own salary. As we speak, the military is on IPPIS, the police is on IPPIS. They have their own peculiarities.

The head of service of the federation (HoSF), Yemi-Esan, likewise urged ASUU to accept the IPPIS, adding that the peculiarities of the union would be accommodated on the platform.

Following ASUU’s complaints of the government’s attempt to strip the Universities’ Governing Councils of their administrative power through the deployment of the IPPIS, Yemi-Esan also tried douse the fears of the striking lecturers by stressing that the Federal Government would not take away the responsibilities of the Governing Council of Universities in the administration of the schools.

The Director-General of the Budget Office, Ben Akabueze, pointed out that only one payment platform should be adopted.

Akabueze highlighted that having more than one platform was too expensive for the government, especially given the insufficiency and limitations of funds.

In his reaction, the President of ASUU, Prof. Emmanuel Osodeke could not be persuaded by these promises and pleas, adding that it was not the first time the government was making a promise of looking into the issues and yet failed.

Accordingly, he did not accept the proposal on IPPIS, and insisted on the autonomy of the universities, which he pointed out was what the laws stipulated, and that IPPIS would erode that autonomy.

Osodeke lamented that Nigeria is the only country where salaries of lecturers were paid through the office of the Accountant-General.

He also inquired on why the NITDA had refused to make available the report of the last test on UTAS, insisting that it must be available for them to study.

On his part, the minister of labour and employment, Dr Chris Ngige said that universities should fund themselves if they seek full autonomy.

Ngige recalled that he urged ASUU to accept the IPPIS in the ongoing negotiations, since it would still accommodate their peculiarities, while discussions continue, but regretted that ASUU went on strike when negotiations were still ongoing without his notice.

The minister commended the leadership of the House on the initiative, while appealing to ASUU to stick with IPPIS to address their grievances.

The Speaker of the House, Hon. Femi Gbajabiamila, announced that the House leadership would meet with President Muhammadu Buhari next week to discuss ways to resolve the ongoing face-off between the Federal Government and the ASUU, as well as the outcome of its interactions with stakeholders in the dispute.

Gbajabiamila however, explained that if the government is to accommodate ASUU’s issues in the IPPIS, seeing the UTAS report amounts to nothing.

The Speaker declared that the most important thing is for the universities to resume as soon as possible so that students can go back to school.

“We will give you the report, but we do not want delays… What is on ground now is that if the government sits with you and asks ASUU what the problems with IPPIS are, we would fix those problems. They did it with the military, and the health sector and others,” the Speaker said.

According to him, the House leadership, in the next couple of days, would put up a report of its interactions with key stakeholders in the dispute and come up with recommendations that will enable the President to view the issues at stake from an informed second option.

The speaker stated further that the information gathered from the extensive interactions would assist the leadership in arriving at fact-based recommendations to finally resolve the strike/crisis.

Consequently, he assured the striking lecturers that the House would invite ASUU to discuss the outcome of the meeting with the president as soon as it has been held.